“A meditative approach [to art] advocates that we would be best served if we focused less on the “self” and more on the expression part of the creative process. . . . to let go of the relentless self-referencing, self-dialoging, self-consciousness, self-criticism, and so on, for at least a few moments, in favor of being relaxed, present, tuned-in, and responsive.”

–Steven Saitzyk on Art, Meditation, and the Creative Process 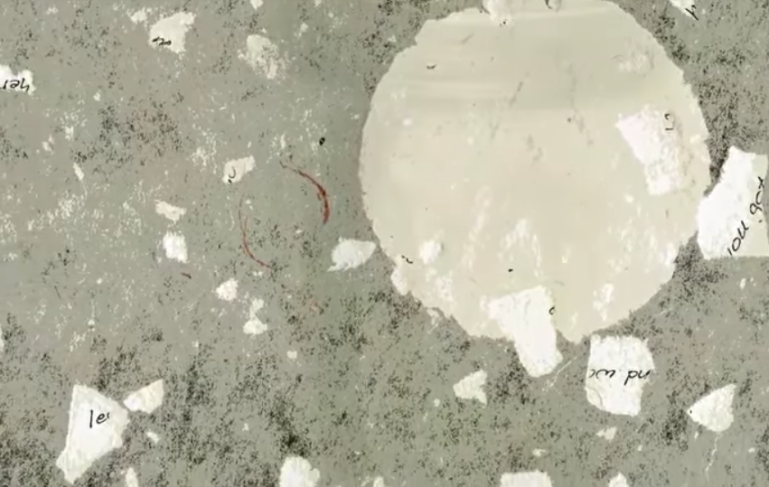 I’ve only felt mostly free of this once, and it was during a summer residency at Penland School of Crafts making paper and books. I went there to make books but what changed everything was my experience making paper.

I’d made books and paper before, but by the second day I was sitting on the studio floor apart from the rest of the group journaling to generate words to go into the books I was making. I’d crafted a few books by then, empty of course, and they seemed soulless without a narrative.

But these were 8 to 12 hour days and we needed lots of paper for book-making. Soon I found myself lost in the process of paper-making: boiling mulberry leaves, pounding them into fibers, mashing fibers into a slurry, sifting the slurry onto screens, onto felts, onto boards, onto presses, adding color, adding materials, adding nothing, not even binding, til my work wasn’t books at all, nor paper, just making . . . and then just sort of witnessing the making in my hands. I started skipping meals, skipping yoga, skipping conversation. My sneakers were stinking from the damp and all I really cared about was what the fibers might become next. It was glorious. It was such a relief. And it was art.

Some years later I signed on to a different sort of retreat, making digital stories in Denver. Once again I’d come to a place where I’d be doing work I’d done before, and thought I knew what to expect, and kind of did and kind of didn’t. On the second day I found myself sitting on a floor again, apart from the rest of the group, journaling. This time trying to resist generating a story. I’d come to a storytelling workshop with a provocation rather than a story. I wanted to contemplate my relationship with words, starting with my own name, and I wanted to use the multimodal makerspace of StoryCenter to re-create the experience I’d had at Penland. Because I believed that if I gave myself space, I’d learn something unexpected about myself, something beyond words.

In retrospect (and now as a digital storytelling facilitator myself) I realize that wasn’t a fair goal to bring into that environment, that learning community.

What I ended up making was a story I felt sort of bad about–because it seemed like a clumsy narrative non-narrative produced for an audience even though, deep down, what I wanted from it was a kind of visual meditation, a juxtaposition of thoughts and artifacts.

But if I give myself permission to note and release the self-consciousness and self-criticism, if I mute the narration and view the sequence of images, I begin to see the process again. The not-story. And the story becomes clearer too.

This is a text widget, which allows you to add text or HTML to your sidebar. You can use them to display text, links, images, HTML, or a combination of these. Edit them in the Widget section of the Customizer.